MLflow is an open source platform to help manage the complete machine learning lifecycle. With MLflow, data scientists can track and share experiments locally (on a laptop) or remotely (in the cloud), package and share models across frameworks, and deploy models virtually anywhere.

Today we are excited to announce the release of MLflow 1.0. Since its launch one year ago, MLflow has been deployed at thousands of organizations to manage their production machine learning workloads, and has become generally available on services like Managed MLflow on Databricks. The MLflow community has grown to over 100 contributors, and the MLflow PyPI package download rate has reached close to 600K times a month. The 1.0 release not only marks the maturity and stability of the APIs, but also adds a number of frequently requested features and improvements.

The release is publicly available starting today. Install MLflow 1.0 using PyPl, read our documentation to get started, and provide feedback on GitHub. Below we describe just a few of the new features in MLflow 1.0. Please refer to the release notes for a full list.

Support for X Coordinates in the Tracking API

Data scientists and engineers who track metrics during ML training often either want to track summary metrics at the end of a training run, e.g., accuracy, or “streaming metrics” that are produced while the model is training, e.g., loss per mini-batch. Those streaming metrics are often computed for each mini-batch or epoch of training data. To enable accurate logging of these metrics, as well as better visualizations, the log_metric API now supports a step parameter.

The metric step can be any integer that represents the x coordinate for the metric. For example, if you want to log a metric for each epoch of data, the step would be the epoch number.

To improve search functionality, the search filter API now supports a simplified version of the SQL WHERE clause. In addition, it has been enhanced to support searching by run attributes and tags in addition to metrics and parameters. The example below shows a search for runs across all experiments by parameter and tag values.

In experiments where you want to log multiple metrics, it is often more convenient and performant to log them as a batch, as opposed to individually. MLflow 1.0 includes a runs/log-batch REST API endpoint for logging multiple metrics, parameters, and tags with a single API request.

You can call this batched-logging endpoint from:

Support for HDFS as an Artifact Store

Windows Support for the MLflow Client

This release adds an experimental ONNX model flavor. To log ONNX models in MLflow format, use the mlflow.onnx.save_model() and mlflow.onnx.log_model() methods. These methods also add the pyfunc flavor to the MLflow Models that they produce, allowing the models to be interpreted as generic Python functions for inference via mlflow.pyfunc.load_pyfunc(). The pyfunc representation of an MLflow ONNX model uses the ONNX Runtime execution engine for evaluation. Finally, you can use the mlflow.onnx.load_model() method to load MLflow Models with the ONNX flavor in native ONNX format.

Other Features and Updates

Note that this major version release includes several breaking changes. Please review the full list of changes and contributions from the community in the 1.0 release notes. We welcome more input on mlflow-users@googlegroups.com or by filing issues or submitting patches on GitHub. For real-time questions about MLflow, we also run a Slack channel for MLflow, and you can follow @MLflow on Twitter.

The 1.0 release marks a milestone for the MLflow components that have been widely adopted: Tracking, Models, and Projects. While we continue development on those components, we are also investing in new components to cover more of the ML lifecycle. The next major addition to MLflow will be a Model Registry that allows users to manage their ML model’s lifecycle from experimentation to deployment and monitoring. Watch the recording of the Spark AI Summit Keynote on MLflow for a demo of upcoming features.

Don’t miss our upcoming webinar in which we’ll cover the 1.0 updates and more: Managing the Machine Learning Lifecycle: What’s new with MLflow – on Thursday June 6th.

Finally, join us for the Bay Area MLflow Meetup hosted by Microsoft on Thursday June 20th in Sunnyvale. Sign up here.

h2>Read More</h@>
To get started with MLflow on your laptop or on Databricks you can:

Detecting fraudulent patterns at scale using artificial intelligence is a challenge, no matter the use case. The massive amounts of historical data to sift through,...

This blog is part 2 of our two-part series Using Dynamic Time Warping and MLflow to Detect Sales Trends. The phrase “dynamic time warping,” at...

At Spark+AI Summit 2019, we announced the GA of Managed MLflow on Databricks in which we take the latest and greatest of open source MLflow... 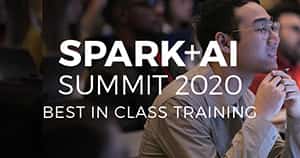